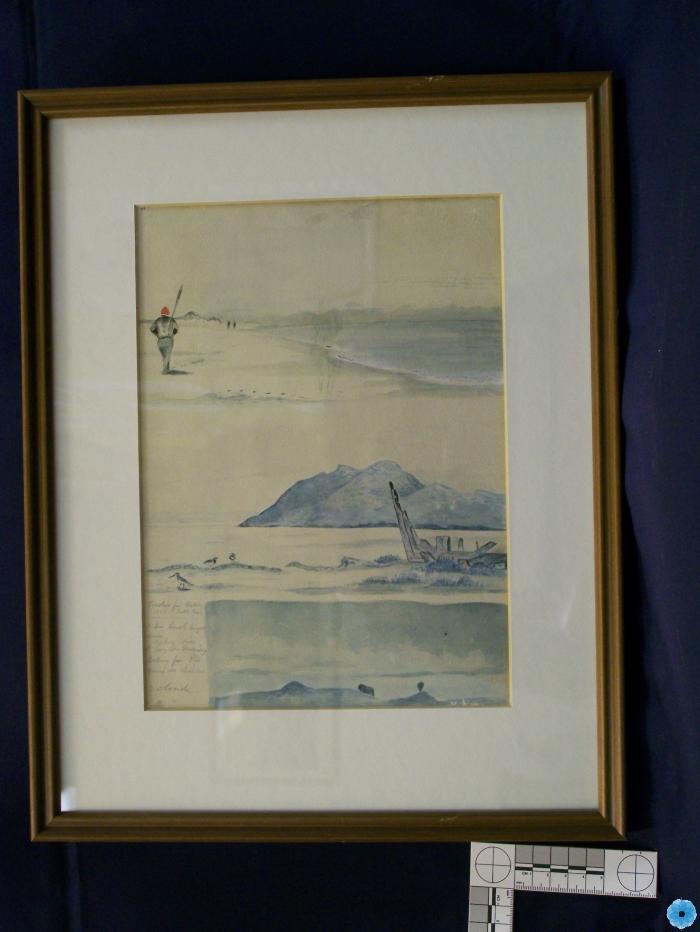 Accession number: 1980.24.45.11
Category: Art
Object type: Watercolour
Date: May 3 – July 22 1854
Measurements: 42 cm L x 33 cm W x 2 cm Depth
Narrative: John Bernard Gilpin was born in 1810 in Newport, Rhode Island, the son of a British consul. Gilpin received a Bachelor of Arts from Trinity College in Hartford, Connecticut in 1831 followed by a medical degree at the University of Pennsylvania in 1834. By January, 1838, Gilpin had moved to Annapolis Royal, Nova Scotia to practise medicine. His father had moved there in 1833 to live near his sons from his first marriage. After spending a few years in the Annapolis Valley, Gilpin went to London to obtain his certification from the Royal College of Surgeons in 1846. Upon his return, Gilpin became one of only five doctors in the province who held dual certification as physicians and surgeons. In 1849, he married Charlotte, the daughter of Benjamin Smith and they moved to Halifax where they had two children: William Sawry and Bernard. Charlotte, however, passed away shortly after on March 2, 1851. In 1854, Gilpin was called to assist in the pregnancy of the Sable Island lighthouse keeper’s wife, Mrs. McKenna. She was having difficulties with the pregnancy and Gilpin remained on the island should any problems arise. While on the island, Gilpin spent a great deal of his time exploring the sandbar and sketching the landscapes; he drew beached ships, shaggy ponies, and sand dunes. On July 15, 1854, Mrs. McKenna gave birth to a son. Gilpin remained until July 22. Unfortunately, the baby died from dysentery on September 3. In addition to his medical interests, Gilpin was a founding member of the Nova Scotian Institute of Natural Science, later the Nova Scotian Institute of Science; he presented the first paper read before the society on February 2, 1863. This paper focused on herring, but Gilpin wrote about a variety of fauna including: walrus, beavers, bears, eagles, seals, salmon, sea fowl, and serpents. He often used his own drawings to supplement his papers and his Halifax Herald obituary mentions his sketches of Sable Island ponies. In 1882, Gilpin became one of the first fellows of the Royal Society of Canada; the same year, he retired to Annapolis Royal. Gilpin was buried next to his wife and infant son, Bernard, in Annapolis Royal following his death in 1892. Sable Island is a sandbar approximately 300 kilometres south-east of Halifax that is renowned for its shipwrecks and wild horses. It is believed Sable Island is a terminal moraine created when glaciers pushed sand into the area during the last Ice Age; the island remains because of the flora trapping the sand and the extra sand in the Sable Island Bank. The mixture of cool and warm ocean currents around the island often creates foggy conditions; Sable Island on average is foggy 125 days per year. The combination of strong currents, fog, and storms can be treacherous, particularly in the days before modern navigational aids; numerous shipwrecks occurred around the island until the Second World War when better equipment became commonly available. The last wrecked vessel was the Merrimac in 1999. The high number of wrecks led to Sable Island’s nickname: the Graveyard of the Atlantic. Many of Gilpin’s sketches depict Sable Island ponies; the horses were first introduced to the island in 1737 but it was the second shipment in 1760 that survived and became wild. The horses were shipped to the island by Thomas Hancock, a Boston shipowner and merchant; he gathered the horses from Acadian farms that were abandoned as a result of the Deportation. The horses were used as basic transportation over the years by the people that lived on the island; the horses hauled lifeboats and survival gear to shipwreck sites and pulled food and equipment in carts. The horses have shaggy coats and manes for protection against the winter cold; they range in colour from bay to palomino to chestnut to black and are short. Their short stature makes them well-suited to the rough terrain although they do not provide a smooth ride. With the modernization of the lighthouse and navigational equipment, the island’s current, human inhabitants consist solely of scientists conducting research on local fauna and gathering climate and meteorological data. Written permission is required from Coast Guard in order to visit the island. Sources: 'An Artist's View of Sable Island: Watercolour Sketches by Dr. J.B. Gilpin, 1854' Admiral Digby Library & Historical Society Dictionary of Canadian Biography: http://www.biographi.ca/009004-119.01-e.php?&id_nbr=6123&interval=20&&PHPSESSID=48ipe7tq56j59aslud1vi26g05 http://museum.gov.ns.ca/mnh/nature/sableisland/english_en/index_en.htm
Description:

This watercolour sketch is actually three individual pictures on one sheet. The top sketch is of a man walking the along the sandy beach, between him and the water is a light sketch of a man riding on horseback; the middle watercolour depicts remains from a ship wreck sticking up from the sandy beach. There are are couple of seagulls walking on the beach and hills in the background; sketch 3 depicts a couple of wild ponies grazing along the sand dunes