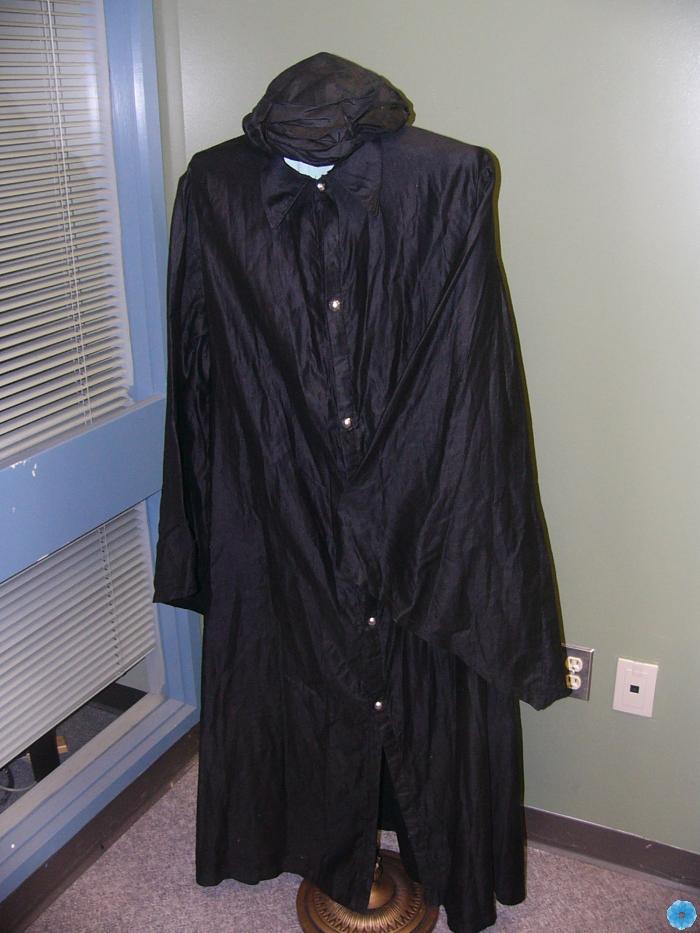 Accession number: 1994.029.12a-b
Category: Public Entertainment device
Object subtype: Knights of the Maccabees
Date: 1881 – 1914
Materials: fabric
Measurements: 142 cm L
Narrative: The Knights of the Maccabees of Laurier Tent #11 in Tiverton used chaplain costumes in their meetings and initiation ceremonies. The chaplain would offer prayers to the Supreme Ruler asking for guidance for the Tent members, and portrayed Mattathias, Judas Maccabeus’ father, in the initiation ceremony. He would also swear in the initiate in as a new member, telling him to them go to the Commander for further instructions when the pledge was completed. Founded in London, Ontario in 1878, the Knights of the Maccabees took their name from the biblical Jewish family who rebelled against Antiochus IV and reconsecrated the defiled Temple in Jerusalem. A benevolent legal reserve society, they provided sick and death benefits to their members, who had to be white persons of sound health and good character. Those who made, sold or drank alcohol were automatically excluded from membership, as were workers of dangerous professions, such as coal miners. Their motto was Astra Castra Numen Lumen, meaning: The stars my camp, the Deity my light, and the colours were black, red and white. Each chapter was known as a Tent, and contained the offices of Commander, Lt. Commander, Knight Record Keeper, Master at Arms, Sergeant, Chaplain, Guards, Sentinel and Picket. Many Tents also had the office of Past Commander. Among their rituals was the conferment of degrees, namely the Degree of Protection, the Degree of Friendship, and the Degree of Loyalty. Each involved a ceremony and dramatization of biblical events associated with the rebellion led by the group’s namesake, Judas Maccabeus. In 1914 the name was shortened to the Maccabees, and in 1962 became the Maccabees Mutual Life Insurance Company. This costume was made by Dominion Regalia, a Toronto Ontario company that has been in operation since 1881. Originally catering to fraternal and religious organizations, they now (2007) have four areas of specialty: awards and identification, fraternal organizations, embroidered, and church products.
Description: