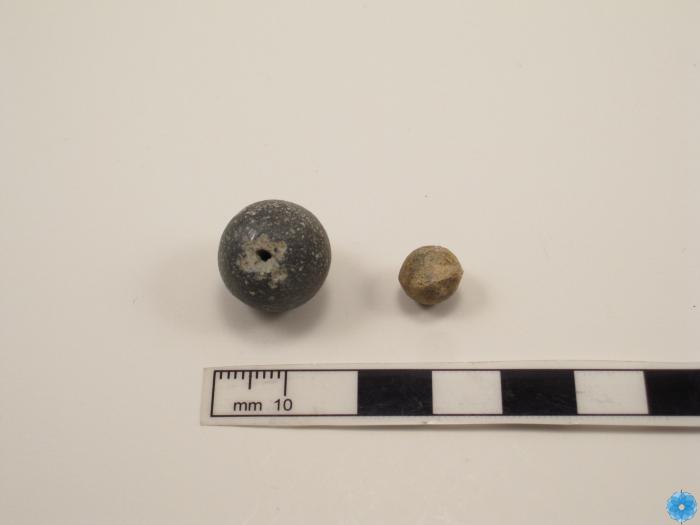 Image use must be for education or personal purposes only.
The contributing institution must be credited.
Comments and Tags (1)

One of 14 archaeological objects collected by Harcourt L. Cameron, a geology professor at Acadia University in Wolfville, Nova Scotia. Harcourt was born in 1912 and died on October 3, 1965. These objects were a gift to Kings County Museum in June 1987 from an unknown donor. Acadia University has Harcourt's publications and some correspondance related to his geology work. He published articles on geology, archaeology, photogrammetry, and Nova Scotia historic sites. Sable Island, sometimes called the "Graveyard of the Atlantic" and Grand Pre were two of his areas of interest. There are 5 objects of each of Sable Island and Beaubassin, 2 from Fort Lawrence, and 1 from each of Barrachois Narrows and the Habitation (Port Royal).

Two balls: one dark gray colour with a hole in the centre of one side; one cream coloured with a ridge making it non-spherical.

Comments from an expert in musket balls and arms in general:

Thank you for your recent enquiry regarding musket balls. I have examined the photos you forwarded along and some of the items do indeed appear to be musket balls. Without examining them first hand it is difficult to determine the type of musket or pistol in which they might of been used. In image number 6 the first ball on the far right appears to be of a .75 Calibre which was a fairly standard size for several British military muskets. Some of the others may have been from small calibre fowling pieces or shotguns which were used for harvesting small game by both military personnel and civilians. When I looked at picture two and saw the first ball had a hole in one side I thought it may be a weight from a small seine used to catch caplin or other small fish. It would be most unusual to find a hollow musket ball and I have not seen or read of one. Were it larger I might posit it were a 18th century grenade of some sort although given it's size that possibility would be unlikely.

As you have indicated these items were retrieved from Sable Island, I have cc'd my colleague Ms. Julie Tompa who is the Parks Canada Project Manager for Sable Island. She may be able to provide additional information from some of the historical files or research data from the island.

Please advise if we might be able to provide additional assistance.