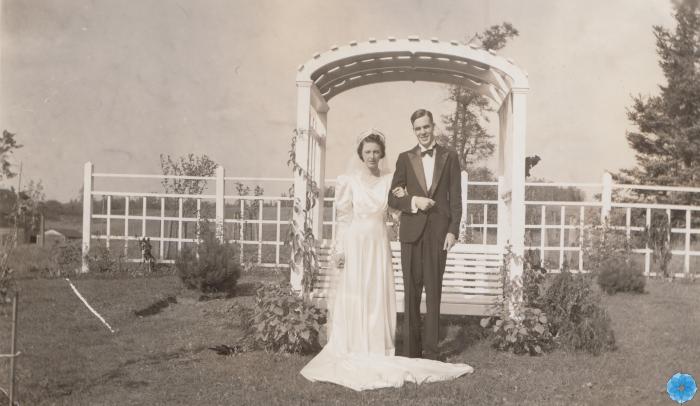 Black and white photograph showing woman and man in wedding attire standing in front of a garden swing and plantings.

This picture of Elizabeth and Robert Shreve was taken following the couples return on their honeymoon in Cape Breton.  They dressed in their wedding attire and posed for the picture in the Bride's parents garden

They were married on September 1, 1940. at Christ Church, St. Stephen, New Brunswick.  Unusually they were married on Sunday evening and when the church bells rang during the service, they alerted the fire department who thought there was a fire.  (full story on file) Her sister Connie and Bob's sister were bridesmaids,  The reception was held at her parents home in St. Stephen, # 52 Prince Street.

She purchased the dress as a ready-made item at Unobskey's Clothing store, in Calais Maine.   Joseph and Sarah Unobskey immigrated to New England from Russia in 1903. Working first in Boston, they relocated to Eastport, Maine, and finally settled in Calais, Maine, in 1911. After Joseph's death in 1922, Sarah and her three sons expanded the family business, which was based on clothing stores and real estate, and helped to revitalize the Calais economy. The family also ran the State Theater in Calais.(http://www.oldfilm.org/collection/index.php/Detail/Collection/Show/collection_id/176)

Elizabeth and her sister Connie both attended Acadia University, Wolfville and when college dances were scheduled they would go home to St. Stephen and then to Unobskeys to purchase gowns to wear.

The picture of them standing in front of the garden swing was taken after they arrived home from their honeymoon.  For their honeymoon they took tents and toured around the Cabot trail by car- all gravel roads at that time.

Later they purchased the 'Mackay House' in St.Stephen.  She thought the house was haunted as she heard loud tapping on the floor.